The old Chinese proverb “Fu bu guo san dai,” or “Wealth never survives three generations”, could have a grim of truth in itself, as we randomly have seen it happening throughout history. Looking back over the last 100 years of Albanian independence as a state of its own, with several political systems (monarchy, communism, democracy) and social-economic dynamics is still hard to point out the bourgeoisie (upper class) holding on to their money for three straight generations. Not to mention here the lack of established royalty. As we frequently hear in people’s conversations when recalling Hoxha’s time “…back in communism we were all the same”.

If a foreigner will read this, he/she might get confused with my reference to middle and upper class in Albania. Why so, since these are pretty straightforward and self explanatory concepts? So, let’s straighten this up for our international friends. Dear Friends, in your developed society professionals such as politicians, ministers, presidents, attorneys in law, judges, builders, businessmen are considered middle class. Well, not in Albania. Just for the sake of it, I took a flash “mini survey” with friends and co-workers. I asked them who are the richest in Albania. The absolute unanimous answer was THE Politicians. 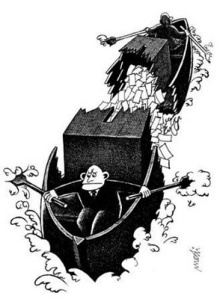 And unlike in other consolidated democracies the above mentioned professions make the newly rich Albanian Bourgeoisie. While professionals like economists, journalists, teachers, professors, administrators, technicians electricians, small businessmen, etc. are the remaining middle class which I’m also part of. We mind our own business and we are certainly the least influential in public policy making process. Therefore, the self exclusion of the newly rich from the middle class, creates a non-representation of our interests in the society.  In addition, the situation becomes even more abnormal due to the rather small base of the middle class (since a considerable percentage is at the lower and extreme poverty levels). What the hell am I saying: I’m part of a weak middle class who does not serve as the engine of growth, the advocator of social values and human rights, and the backbone of a state run by laws instead of by strongmen? Sadly, maybe!

Not only our newly rich Bourgeoisie is the upper class, but to some extent they also could be seen as “royals”.  What pushes forward an issue to the top political agenda apart from its importance in a normal democracy is mainly the lobbing of interest groups and constituents’ pressure toward their political representations. In contrast, here the constituents’ pressure happens to be only in one day, on the Election Day. In 16 years as a voter I never met with my political representative in Tirana, neither write to his/her staff on an issue since they are publicly invisible. As a foreign student in US and non-US citizen I once wrote to my congressmen regarding my scholarship status. Here’s how.

I could go on for hours with pros and cons on the traits of the newly rich, but that’s not important here. What’s crucial is their way of governing. What I desperately hope to see is that we immediately find “a pill” to this sickness. It is very wrong to be governed by a political class which holds deep the interest of the 0.5% rich guys and leaves ignored, neglected beyond belief the needs of the rest. Politicians are there to make and enforce public policies. We don’t vote them to tailor policies as if were to be their own dresses.

This blog is about my ongoing life journey, my hometown, places I have visited, people I have met, travels I have taken in Albania and abroad. I hope you can relate to it and find it entertaining.
Feel free to share this blog content and posts you like, and if you leave a comment that will be greatly appreciated :)
Thanks for visiting,
Armela