So here I am at the Millennium cinema after a week of persisting my girlfriends  to watch Taken 2 by using social research arguments. I don’t even know how I succeeded to convince them, knowing their specific and rather alternative movie taste. Thank you girls for joining me, I own you a drink! 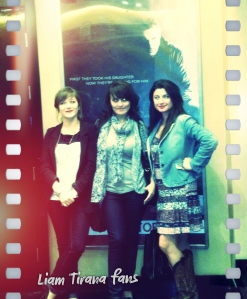 What really triggered my interest in Taken 2 is plain curiosity how Hollywood directors portrait my people, customs, and cultural elements especially in some oriental set up setting like Istanbul.

The sequel of “Taken 2 ” is very simple, as simple as 1+1=2 for first graders is. The Albanian sex traffickers who kidnapped Kim (Maggie Grace) in Taken 1 are after her father, retired CIA agent Bryan Mills (Neeson), seeking revenge on Bryan and his ex-wife, Lenore (Famke Janssen) who happen to be in Istanbul together with their daughter. 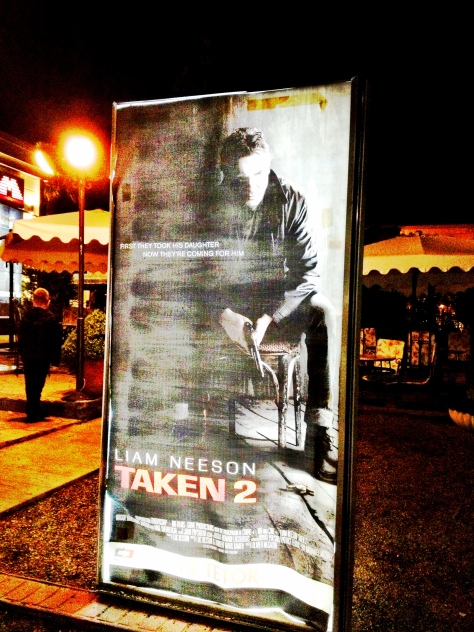 After the first 10 minutes there was nothing left to imagine or to look forward to. It was very clear who were the winners, the losers, the good guys, the evil ones, and who will be slaughtered in name of some Albanian tribal revenge. It’s a movie advertised as an adrenaline-fuel thrill ride with a pretty hot thriller staring like Liam Neeson, but unfortunately with no substance and weight behind its contend. Not even a charismatic movie star like Liam could compensate, it’s that bad that the action thriller PG-13 turns out comic and ridiculously cheesy. But ok, Rotten Tomatoes critics can rate it.

What’s striking is that even simple facts and symbols were not straight.  Since we’re talking about a Hollywood movie, I find quite embarrassing this mishmash of symbols like the blue color of our flag with an eagle or some weird ES number plate. What a lousy research! After all is it that difficult for a crew of experts on multi million movie budget to check these facts? If you ask a 10 year old kid here can tell you that Tropoja a city situated in northern Albania and it is not bordered with Turkey (Turkish flag was showing in the borderline). Furthermore, as a matter of fact Albanians do speak Albanian and do not greet each other in Arabic with “Salam Aleikum” though the majority of us are Muslim. Plus what a confusion with traffickers’  names as father named Murad, sons respectively Mirko and Marko. Sexist was the ritual of burial ceremony with almost no women around, but rough dark skin looking men (for the record people living in northern part of Albania  are mostly blond, tall and blue eyed). Not that this matters, but just to straighten the facts.

In addition, I found misleading using the stereotype of revenge/blood feuds in such a criminal context. First by involving the family in bloodthirsty revenge plot they’re talking no longer about Albanian gangs, but rather Albanian people of Tropoja seeking revenge for their lost son’s life. Second, by building up the scenario on one of the most controversial rules of the Kanun of Lekë Dukagjini , a code of rules dating back in the 15th century where is specified how murder is supposed to be handled, which lead to blood feuds (similar to Italian Vendetta laws) risk of deforming and generalizing this particular clustered phenomena into some randomized crime and unfaithful Albanian stereotypes. In other words, that’s again the danger of little knowledge.

To sum it up I can’t agree more with Wesley Morris of The Boston Globe: “It’s a stupid movie by smart people who aren’t smart enough to realize it’s stupid. The absurdity grows like mold in the dank, dark of seriousness. So it’s fun for some of the right reasons, but mostly for the wrong ones.”

This blog is about my ongoing life journey, my hometown, places I have visited, people I have met, travels I have taken in Albania and abroad. I hope you can relate to it and find it entertaining.
Feel free to share this blog content and posts you like, and if you leave a comment that will be greatly appreciated :)
Thanks for visiting,
Armela